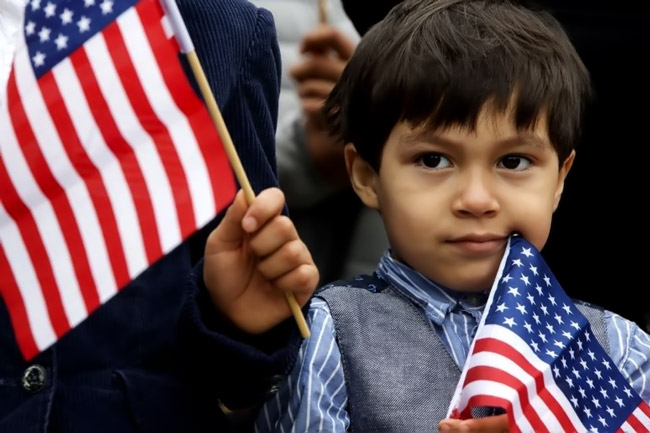 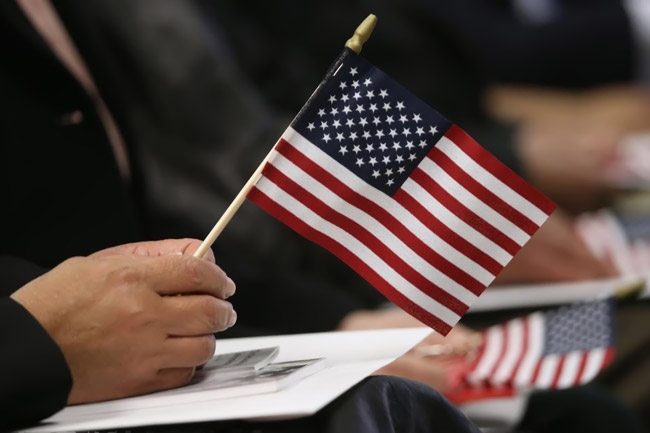 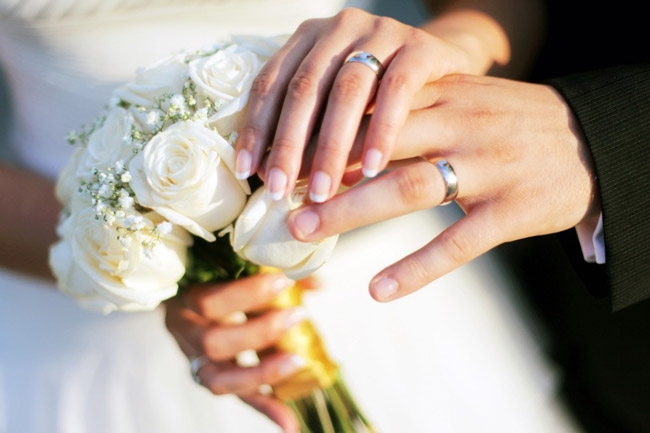 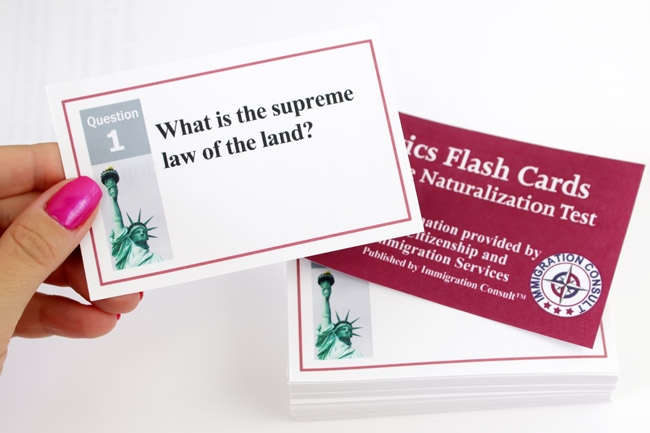 A: Principles of American Democracy

1. What is the supreme law of the land?

2. What does the Constitution do?

-  sets up the government

3. The idea of self-government is in the first three words of the Constitution.  What are these words?

4. What is an amendment?

-  a change (to the Constitution)

-  an addition (to the Constitution)

5. What do we call the first ten amendments to the Constitution?

-  the Bill of Rights

6. What is one right or freedom from the First Amendment?*

7. How many amendments does the Constitution have?

8. What did the Declaration of Independence do?

-  announced our independence (from Great Britain)

-  declared our independence (from Great Britain)

-  said that the United States is free (from Great Britain)

9. What are two rights in the Declaration of Independence?

10. What is freedom of religion?

-  You can practice any religion, or not practice a religion.

11. What is the economic system in the United States?*

-  Leaders must obey the law.

-  Government must obey the law.

B: System of Government

13. Name one branch or part of the government.*

14. What stops one branch of government from becoming too powerful?

15. Who is in charge of the executive branch?

-  Senate and House (of Representatives)

-  the Senate and House (of Representatives)

-  Answers will vary.  [District of Columbia residents and residents of U.S. territories should answer that D.C. (or the territory where the applicant lives) has no U.S. Senators.]

21. The House of Representatives has how many voting members?

22. We elect a U.S. Representative for how many years?

-  Answers will vary.  [Residents of territories with nonvoting Delegates or Resident Commissioners may provide the name of that Delegate or Commissioner. Also acceptable is any statement that the territory has no (voting) Representatives in Congress.]

-  all people of the state

25. Why do some states have more Representatives than other states?

-  (because of) the state’s population

-  (because) they have more people

-  (because) some states have more people

26. We elect a President for how many years?

27. In what month do we vote for President?*

28. What is the name of the President of the United States now?*

29. What is the name of the Vice President of the United States now?

30. If the President can no longer serve, who becomes President?

31. If both the President and the Vice President can no longer serve, who becomes President?

-  the Speaker of the House

32. Who is the Commander in Chief of the military?

33. Who signs bills to become laws?

35. What does the President’s Cabinet do?

36. What are two Cabinet-level positions?

-  Secretary of Health and Human Services

-  Secretary of Housing and Urban Development

-  Secretary of the Interior

-  Secretary of the Treasury

37. What does the judicial branch do?

-  decides if a law goes against the Constitution

38. What is the highest court in the United States?

39. How many justices are on the Supreme Court?

40. Who is the Chief Justice of the United States now?

41. Under our Constitution, some powers belong to the federal government. government? What is one power of the federal

-  to create an army

42. Under our Constitution, some powers belong to the states. What is one power of the states?

-  give a driver’s license

-  approve zoning and land use

43. Who is the Governor of your state now?

-  Answers will vary.  [District of Columbia residents should answer that D.C. does not have a Governor.]

-  Answers will vary.  [District of Columbia residents should answer that D.C. is not a state and does not have a capital.  Residents of U.S. territories should name the capital of the territory.]

45. What are the two major political parties in the United States?*

46. What is the political party of the President now?

47. What is the name of the Speaker of the House of Representatives now?

48. There are four amendments to the Constitution about who can vote.  Describe one of them.

49. What is one responsibility that is only for United States citizens?*

50. Name one right only for United States citizens.

51. What are two rights of everyone living in the United States?

-  freedom to petition the government

-  the right to bear arms

52. What do we show loyalty to when we say the Pledge of Allegiance?

53. What is one promise you make when you become a United States citizen?

-  give up loyalty to other countries

-  defend the Constitution and laws of the United States

-  obey the laws of the United States

-  serve (do important work for) the nation (if needed)

-  be loyal to the United States

54. How old do citizens have to be to vote for President?*

55. What are two ways that Americans can participate in their democracy?

-  help with a campaign

-  give an elected official your opinion on an issue

-  write to a newspaper

56. When is the last day you can send in federal income tax forms?*

57. When must all men register for the Selective Service?

A: Colonial Period and Independence

58. What is one reason colonists came to America?

59. Who lived in America before the Europeans arrived?

60. What group of people was taken to America and sold as slaves?

61. Why did the colonists fight the British?

-  because of high taxes (taxation without representation)

-  because the British army stayed in their houses (boarding, quartering)

-  because they didn’t have self-government

62. Who wrote the Declaration of Independence?

63. When was the Declaration of Independence adopted?

65. What happened at the Constitutional Convention?

-  The Constitution was written.

-  The Founding Fathers wrote the Constitution.

66. When was the Constitution written?

67. The Federalist Papers supported the passage of the U.S. Constitution.  Name one of the writers.

68. What is one thing Benjamin Franklin is famous for?

-  oldest member of the Constitutional Convention

71. What territory did the United States buy from France in 1803?

73. Name the U.S. war between the North and the South.

-  the War between the States

74. Name one problem that led to the Civil War.

75. What was one important thing that Abraham Lincoln did?*

-  saved (or preserved) the Union

-  led the United States during the Civil War

76. What did the Emancipation Proclamation do?

-  freed slaves in the Confederacy

-  freed slaves in the Confederate states

-  freed slaves in most Southern states

79. Who was President during World War I?

80. Who was President during the Great Depression and World War II?

81. Who did the United States fight in World War II?

82. Before he was President, Eisenhower was a general. What war was he in?

83. During the Cold War, what was the main concern of the United States?

-  worked for equality for all Americans

87. Name one American Indian tribe in the United States.

[USCIS Officers will be supplied with a list of federally recognized American Indian tribes.]

88. Name one of the two longest rivers in the United States.

89. What ocean is on the West Coast of the United States?

90. What ocean is on the East Coast of the United States?

92. Name one state that borders Canada.

93. Name one state that borders Mexico.

94. What is the capital of the United States?*

[Also acceptable are New Jersey, near New York City, and on the Hudson (River).]

-  because there were 13 original colonies

-  because the stripes represent the original colonies

-  because there is one star for each state

-  because each star represents a state

-  because there are 50 states

98. What is the name of the national anthem?

99. When do we celebrate Independence Day?* 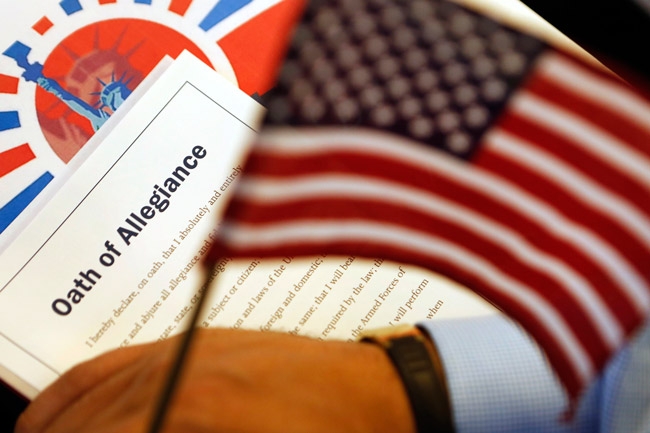 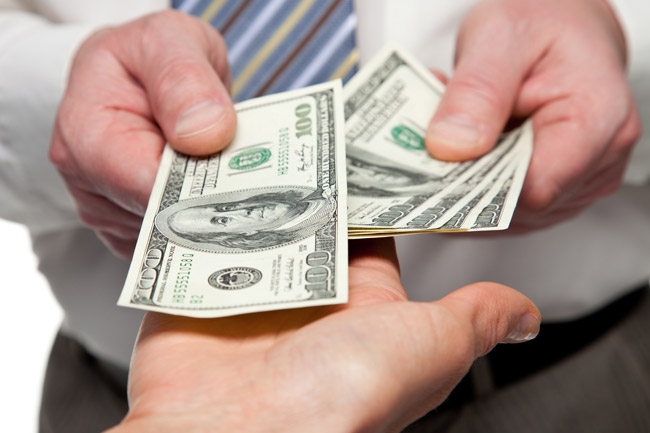 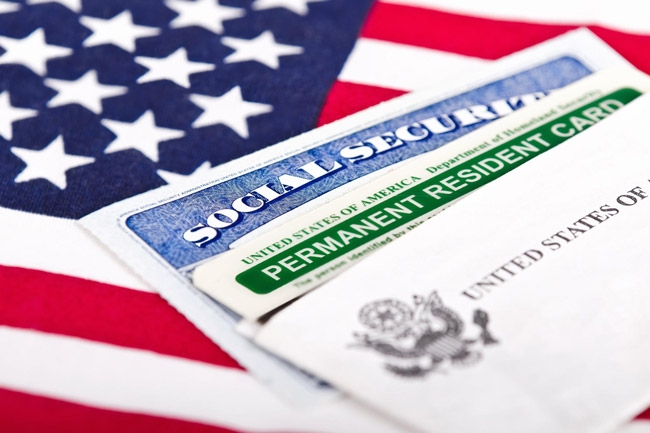 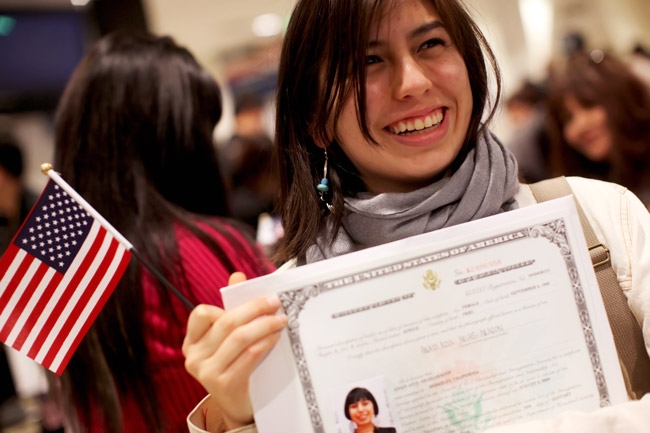 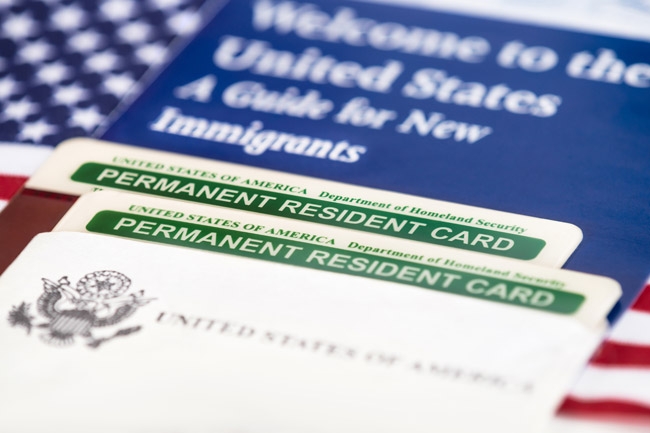 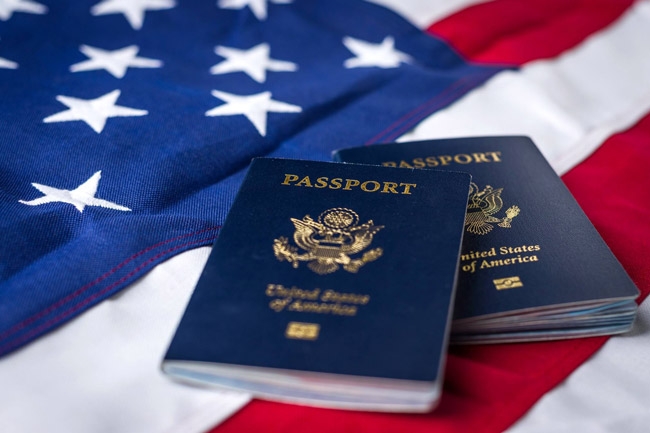